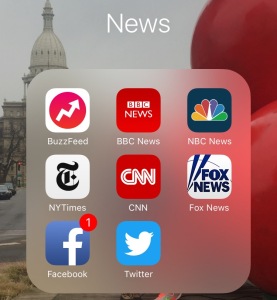 In an attempt to blackout the media, could we do it?

According to a new report by the Pew Research Center, nearly 64 percent of U.S. adults own a smartphone. With a smartphone comes a higher accessibility to social media, podcasts, online news sources and beyond. In an age where flip phones have transitioned to smartphones, news media is now always at our fingertips.

So how do these numbers relate? With the growth of smartphones and the growth of applications on these smartphones used to access media, it isn’t surprising that the numbers for digital news entities favor the mobile population. According to the Pew Research Center, for news sources such as Yahoo-ABC News, CNN Network, CBS News, Huffington Post, Buzzfeed and more, the numbers of unique visitors for January 2015 that came from a mobile device were all higher than the numbers of visitors that came from a desktop computer.

With this growth of mobile digital news, it has become nearly impossible to avoid the media. In an attempt to blackout all media for 48 hours, I realized how true this statement was. This meant having to avoid all social media apps, all online news sources, the radio, the television and even friends who constantly engage in all of these platforms.

As a millennial, being attached to one’s phone seems second-nature. During my second day of the blackout, the first thing my friend did when he woke up was check his social media and news applications on his phone to get his daily update. Almost instantly, he turned to me to alert me of the magnitude-7.1 earthquake that occurred in Alaska. Even though one could heedfully try to avoid the news, because it is constantly accessible to those around, it proves futile.

This brings the question of where this will lead the media in years to come. With digital news advertising revenue continuing to grow from the years 2011 to 2014, along with the 78 percent increase in mobile advertising from 2013 to 2014, the mobile presence seems undeniable.

Whether or not the news media’s growing presence will impact millennial’s increasingly negative view of the media (from 40 percent believing it has a positive impact in 2010 to 27 percent) is another question to consider. Will a growing availability of the media create a stronger relationship with millennials, or is the growing availability what fueled this negative outlook in the first place?

From an age centered around newspapers, to an age where news sources are expected to have websites with written content, photos, videos and mobile platforms and apps, the media has come a long way from a printing press. — Lauren Shields