Detroit may be known for a host of things — including being the Motor City, the founding city of Motown and techno music, casino’s, it’s sports teams- Lions, Tigers and Red Wings — but it is also an amazing city for businesses.

I got to witness that side of the city first hand last Friday when my media entrepreneurship class took a Detroit Field Experience. We met business owners and learned how they got their big break. Not to mention, we also got to take a mini tour of the beautiful city which really put the perfect touch on the trip.

We first visited a company called Bamboo Detroit. During this visit, we got to hear from two professionals —Amanda Lewan and Eric Thomas — and not only listen to them talk about their career beginnings, but also get advice and ask questions.

Amanda is not only the co-founder of Bamboo Detroit, but also the CEO. She runs the city’s very first co-working space and is growing and expanding even as competitors are coming into the market. Amanda talked to us about how when starting out with her company they didn’t really have a budget so it was a bit challenging at first, but when they got some money for their budget, she used it to purchase Google Ads and for social media, and explained that this is a good way to get started.

Eric Thomas talked to us about his career and starting of Saga MKTG. Eric not only knew what he was talking about, but he was also funny and enjoyable to listen to. Eric is a digital writer, however he doesn’t write for typical websites that you would assume, he writes on LinkedIn. Yes you read that correctly: He writes on Linkedin and has has a huge following.

One of the articles Eric posted discussed the infamous Pepsi commercial with Kendall Jenner. People at Pepsi even read his article! On top of Eric Thomas telling us about his writing experiences, he also told us about the connections that he’s made and well established people that he’s had the pleasure of meeting with, with one of those people being Facebook creator Mark Zuckerberg. He also told us about his home life growing up, how he got to where he’s at now and he was just an all around cool guy.

Next we went on a brief tour through Detroit stopping at the Guardian Building and the Spirit of Detroit. 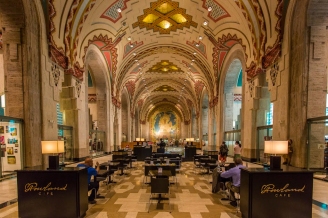 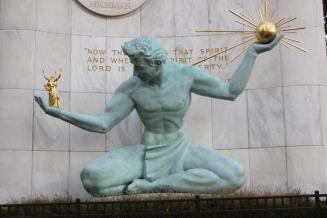 We then went to our professor Amy’s house who not only graciously invited us into her beautiful home, but fed us some delicious food and let us meet her husband and awesome dog.

Although this was indeed a lunch stop, we still kept things rolling as we were then introduced to the founder of Hunger in Detroit, Shanley Pearl. Listening to Shanley speak was truly one of the highlights of the day as she talked to us about her business, which is extremely social media oriented.

It was refreshing to hear in a world where we’re so dependent on social media now, we don’t often talk about how important it is or can/ will be in out jobs. Shanley also was kind enough to share with us the apps that she uses to run her social media accounts and keep her Instagram account as fly as it is. Shanley has 10 set clients and is constantly busy.

From there we go on another tour, this time through Belle Isle Park, before arriving at our next destination: The Sugar House. We met with owner Dave Kwiatkowski, who owns multiple restaurants. Dave gave us really good insight into owning a business as well as what sets him apart from his competitors.

Dave was open with us and shared that since he doesn’t have any interests in sports, he knew there was no reason to have TVs plastered around his bar, so instead he made it more unique and personal for him by hanging up animal heads on his brick walls in his bar. Not only did he know the audience he wanted to attract but he knew what would make him happiest when he walked into work every day and it worked.

Our last stop on our businesses tour, was at TechTown to meet with Tamara Kamara. Tamara gave us brilliant advice as well as an invite into her personal life as she talked about everything from her job, as well as having a child while in school but still being determined to graduate, which she indeed accomplished.

She also really stressed the importance of balancing your work life as well as your home life by using on of her employee’s as an example who has a new-born at home but is always spending long days in the office and she has to tell them to take a break and go home because they’re going to miss the important things at home with their baby if they keep it up.

I really appreciated her telling us this because I know for myself personally I tend to overwork myself already in college so it was not only good advice for me to hear now, but it was also a reminder to myself that when I do make it in my career field not to stress there either because my life is more important than any job.

Overall I thoroughly enjoyed each presenter equally and am beyond glad that I got to experience this opportunity because of my awesome professor Amy. The Detroit experience/tour trip for my class was the trip I never knew I wanted, but the trip I needed. I was presented so much valuable and fulfilling information in one day and I am beyond thankful.