Chase Rickaby grew up in Nelson, British Columbia, and by the age of 16 he had discovered a passion for photography and content creation. 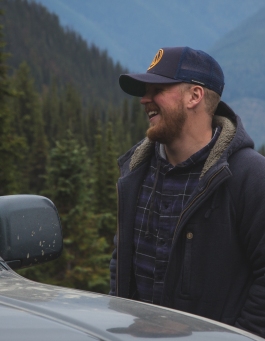 After college, he spent some years doing outreach work in Calgary. While creative work was always a hobby, it became a sort of part-time job as Tamarack Media Co. alongside his full-time job. Within a year and a half, he quit his outreach position and moved back to Nelson to pursue Tamarack Media Co., where he is a co-founder.

Ultimately, photography acted as a segue into video production. The main focus at Tamarack is video and photographic production, while helping clients with marketing strategies to maximize the effectiveness of their freshly produced content.

Chase and I had a chance to talk about the importance of authenticity in not only the content creation business but in all of life as well. But to really be effective, he explained the importance of a holistic understanding of marketing. For me, it certainly applied to the entrepreneurial concepts discussed over the course of the semester.

While Tamarack hasn’t been on the scene for a relatively long time, they’ve worked on campaigns for companies like Remy Martin and Nelson Brewing Company, all the way to local real estate business where they saw a need for effective marketing.

SPARTANS INNOVATE: Where do you find your inspiration?
RICKABY: The big thing for me is I really just want to work with people that are stoked about what they’re doing. I try to be curious as much as possible, even just a coffee shop, I still want to find interest in that place and what the people are doing. I find inspiration in people that are really stoked about what they’re doing, ‘cause usually if they’re really stoked it’s probably pretty creative and things are probably done pretty well. I want to be that kind of business myself.

How do you develop authenticity with your client?
I do a ton of face-to-face work every day, always talking to people, always meeting people. I’ve come from an entrepreneurial family, so I’ve been around it for a long time, but I’ve only been acting it for the last two years. So I really think the big thing is just developing some kind of trust – you gotta develop some kind of trust with them – and just being open and being transparent with what you’re doing. Those are two huge traits that get a really positive response from people or clients or anyone really. People need to trust you and you’ll get work.

CR: Video is the money maker now. I don’t think photography and graphic content will ever go anywhere; I think there’s always going to be room for them. The three reasons you use video are: one, to raise awareness; two, to help people consider your brand more; three, you hopefully want to make people convert or to drive a sale through whatever it is that you’re doing. I just read this article today about how when you do a video ad and simply remove any friction from converting to whatever the sale is, there’s something like a 23 percent increase in the possibility of having a sale.

So then what’s the way to remove friction in that situation?
[Removing friction] is making the process for the buyer as easy as possible. It literally needs to have, hopefully, no click. Especially for the online world, they shouldn’t have to click on anything. [The video] should just start playing, they should see it, and it should be one click then to get to where they need to go and then another click to complete the sale. That is it. It needs to be that simple. That’s kinda what Amazon has done, too. It’s the most frictionless system out there for buying something and that’s why they’re such a big company.

What do you wish someone had told you when you started this path?
Thinking back, I wish I would’ve had more guidance into developing a little bit stricter of a plan. I think if I would have started of with a little bit more of a plan, I would’ve sat down and thought about it. But I was pretty young and not really thinking on that level. Obviously, the better you plan the better it’s gonna be, but I also believe plans always change. So I’m kinda in the middle [on that] but I think I should’ve had more of a plan than I did when I started. I wish somebody would’ve given me some insight that I should plan and how I should plan.

What’s one of the best pieces of advice you’ve received so far?
It just comes back to what I was saying before. Don’t lie, don’t cheat, be honest, and work hard of course. That’s just the key to it all. There’s a high, high success rate if you’re a hard worker.

This interview was edited for length and clarity.