This week we took a look at Marie Forleo’s interview with THE social media expert: Gary Vaynerchuk. Gary gained his momentum when he launched winelibrary.com, growing his family business from 3 million to 60 million in just several years. Later, he co-founded Vayner Media, a full-service agency “built for the now” with brother AJ in 2009. Focused on helping companies and individuals build their digital brands, Gary has established himself as not only an industry leader but an industry expert in all things social – across the globe. 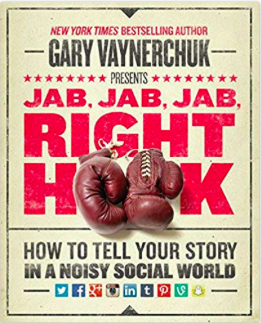 Well, yeah, it’s a book Gary wrote. But more specifically, it’s his way of looking at social media strategy – like boxing. Those who are uninformed think boxing is just two guys punching each other in the face. In reality, those knowledgeable, Gary says, compare it to chess. It is filled with strategy and requires serious thought.

This can too be said about social media marketing and reaching your audience. It’s not all about that right hook – if it were, people would just be ducking left and right. You’d never catch them. Reaching your audience and maintaining that connection has a hell of a lot to do with your “jabs” as Gary calls them. And jabs aren’t easy. Even looking at Marie Forleo’s show, Gary looks around and says: this is all a jab, but look how much goes into it. Everyone is working tirelessly, and this 30-minute interview isn’t even their right hook. That’s what it takes to make it.

Gary says that the biggest things those trying to create a digital brand need to understand is that:

Honestly, I learned more in 30 minutes from this guy about social media marketing than I have in years of being an avid digital user. He knows how to take something huge and broad and get it down to the nuts and bolts. You won’t get it right by being on every platform and just sitting back and hoping that’s enough. It’s about adhering to your audience, the context of the audience in the platform and having the guts to take those 90 minutes of your day that you spend on BS and put them into marketing your company and making connections. And, above all, you’ve got to care about your customers – or let’s be honest, none of this even matters.

If Gary V. can make personal phone calls to consumers and get in people’s faces, so can you.