The cliche of ignorance being bliss does not apply to creating a new media startup.

By ignoring the competition in your market, you do nothing but set yourself up to face them later in the development of your company. This only reinforced what I wrote about in my blog post from last week, with startups, you have to address the weaknesses of your startup before launch. When overlooking your competition you might make the mistake of trying to be the same company they already are. Prior to learning about startups, I would have believed that you should ignore competition at all costs in order to stay in your own lane and serve an untapped market.

In NPR’s How I Built This podcast, Bumble Founder and CEO Whitney Wolfe offers her own story of going from helping create Tinder to launching her own dating app called Bumble. Wolfe’s idea for Bumble came very organically through Paul Graham’s method of problem, solution, product for startup ideas. Wolfe’s story surprised me the most took what she remarked as the lowest point of her life and turned that into a successful company.

The story of Bumble coming to fruition was especially impactful for me because as a college student a story like this is a reminder that light can come from the darkest moments of our lives. Tinder was a company that caused Wolfe so much personal and professional grief. Yet because of her traumatic experiences with Tinder, she was able to launch her own version of a dating app that fixed many of the unaddressed problems. 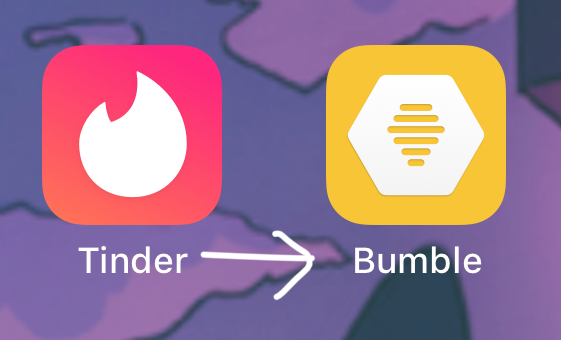 As far as competition is concerned, Bumble faced big challenges with the likes of Match.com and Tinder. Yet, Bumble differentiated itself in ways that took weaknesses of their competition and made them their own strengths. With Tinder specifically, Wolfe understood the weaknesses of Tinder and of society at large. She told NPR’s Guy Raz that men and women are often going in opposite directions because of how society has trained them: Men pursue the women while women are expected to play hard to get.

So Wolfe wanted to make Tinder’s weaknesses into Bumble’s strengths. By creating the Facebook profile link badge, it makes anonymity much harder to achieve. And to counteract creepy male messaging, Bumble forced women to make the first move. Something that both male and female parties were happy with. Men get to feel flattered, and women feel a sense of empowerment, Wolfe said.

Another thing about Bumble and dating apps in general that interested me was when they were talking about how internet dating used to be taboo. Because of my age and when I was introduced to dating apps, I never knew of this stigma towards online dating until this podcast. With a lot of cultural things, it seems that it’s taboo until it’s not. Meaning the tides turn very quickly from not being accepted to being totally accepting of a new idea which changes the way teens date. As soon to be media practitioners I wonder which taboo internet idea will soon become mainstream, what do you think it will be?

3 thoughts on “Know Your Enemy to Survive the Startup Game”