The Pew Research center released its 2017 annual report regarding how American’s receive their news. They analyze numerous ways a person can access news and how they access their news and compare them to previous years.

After our JRN 450 class discussion about the possibilities that the 2017 report could hold, I decided to write down a couple hypotheses based on what I think may have changed within the past year.

Hypothesis 1:  Apps and social media are how the majority of American’s receive their news.

The world has been dominated by technology. Standing in line waiting to order Starbucks, eating with friends at restaurants and even when people are stuck in traffic, people are continually on their phones. There’s an interesting article by Julie Beck called “Ignoring People For Phones Is The New Normal,” that shares her insight on the very apparent increase of cell phone usage in social settings and I agree with her viewpoint on the matter.

Because of how technologically advanced our world is, newspapers are dying out. But that doesn’t mean that the company itself is dying out, just the act of printing words on paper that is becoming less and less common. I find more news companies turning toward different types of mediums and platforms to report their news,

This chart was produced by Pew Research Center and was included in Pew’s Digital Media Fact’s Sheet. 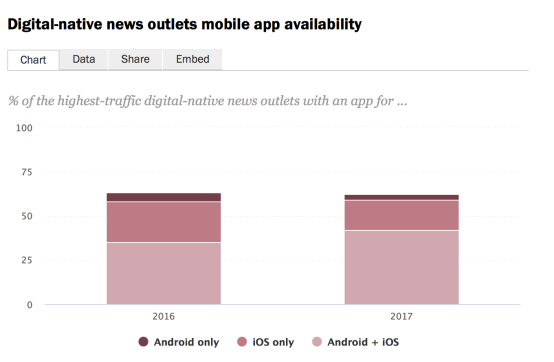 Reaffirming my thought process that I stated above, mobile app availability is crucial to help news outlets to gain higher trafficking and another way to provide income to their business. I thought it was interesting to see that from 2016 to 2017 there was a decline in “Android Only” apps.

Either more people are switching over to Apple products or companies are making more apps specifically for Apple products. I’m interested to see where this leads in the future. Is it paving the way to eventually an Apple centered product world?

This chart was produced by Pew Research Center and included in Pew’s Newspaper Fact’s Sheet. 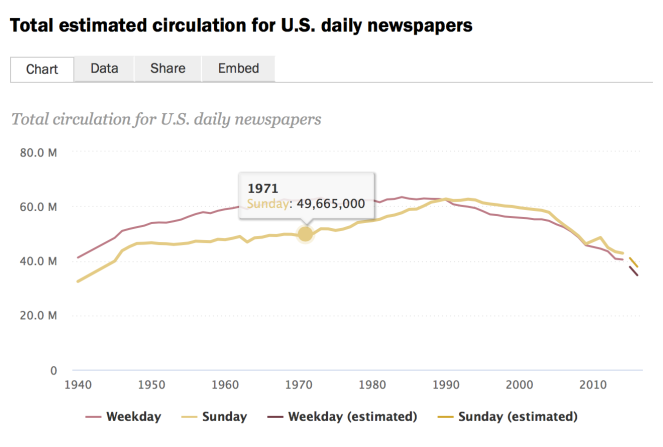 When I read Pew’s Newspaper Fact’s Sheet, I wasn’t surprised at the information that it entailed. It supported the second hypothesis that I made. According to the article, there has been a steady decline taking place since the early 2000’s. Since then, there has been faster and more advanced technology available. Also, social media such as Facebook and Snapchat were created and changed the way the whole world communicated.

Though I only touched upon the results of Newspapers and Digital Media, the Pew Research center did an exceptional job of covering all mediums and platforms. Reading this report made me reflect on how not only the way we receive news and information have changed drastically within the past couple of year, but how we communicate in general.

There are so many advantages to having access to the news by just a click of a button, but also it’s wasting away one of the most popular and well-known forms of communication that have been present in our world for so long. The Printing Press.

Newspaper companies aren’t the ones that are in trouble, in fact, I think they are doing a good job at adapting to the demands of the world that’s continually advancing in technology. It’s the art and action of printing a newspaper that is dying. Even though it can be disheartening to think about, it’s exciting to think about the future of how we report and receive news will unravel.