I found the digital news audience fact sheet very interesting. I have always wondered about tracking digital audiences, and this gave some insight about surveys, analytics, and data. Part of my interest comes from my awareness of my own habits changing. I find myself checking the Facebook “trending” section more than individual news websites. This is due to convenience, diversity of soft and hard news, and because the subjects catch my attention.

Today, for example, I saw that Betty White was trending on Facebook and immediately panicked a little because lately when someone that old is trending it is not good news! After I scrolled over her name and was assured that she is alright, I then checked the other stories, including the Orlando Police Department. I then went over to CNN and the New York Times to read the full story about the suspect in a police officer shooting that as arrested today. With the news about Betty White, I absolutely got that news from social media.  With the Orlando shooting, I’m not sure if I fall into the category of getting my news from a social networking site or from a digital source, the news website. 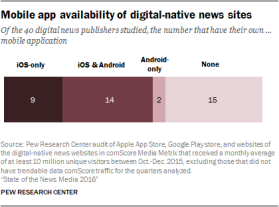 The most shocking part of this section in my opinion was the mobile app availability. I am very surprised that 11/40 news sites had mobile apps specific to either iOS or android. 9 of those are iOS only, but research showed at the end of 2015 that 42.7% of Americans used iOS phones. Assuming those statistics haven’t changed drastically, it is reasonable to think that 9 of the 40 news site studies had mobile apps that around half the population cannot use on their mobile phone.