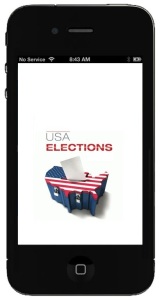 Thanks to The Boston Globe and Change.org, there are now apps with curated information on helping you choose a presidential candidate to vote for, as well as everything else we will be voting for in November.

These apps come at a perfect time when many people don’t always trust media coverage anymore. They think it’s too skewed or too negative. They think it isn’t reliable in informing them on the election and who to vote for. They want their news from trusted sources and organizations.

The “Change Politics” app from Change.org allows users to get information directly from the candidates by asking them specific questions. In a blog post on Change.org, the “Change Politics” team says that it “will increase citizen participation in campaigns by allowing voters to engage directly with the candidates in the time leading up to the elections. It will also shift influence in elections from parties and paid ads, to individuals’ trusted personal networks.”

This app comes from the fact that voters are not being swayed by or believing in political ads and messages. It’s more user-friendly and gives voters a hands-on experience in figuring out who they truly want to vote for.

Another election app that aims in different direction for phones and computers is called The Boston Globe app. This provides you with real-time updates for the primaries and caucuses, and I’m sure it will be used for the actual election. So instead of manually refreshing your Twitter feed or the news app you love, it automatically does it for you every 15 seconds. You’re provided with how many people actually voted for each candidate, and it even breaks it down for you by city.

Similar to the Change.org app, it is more user-friendly and allows you to be right in the election process.

Both of these apps are getting more and more people to actually vote. They are helping voters to be better informed on topics,  giving them the opportunity to make an educated vote, without being swayed by a biased news source or negative attack ad.

On another note, the Republicans and Democrats teamed up with Microsoft for the Iowa caucus, as well as for the rest of the primaries and caucuses. At caucus locations a phone and tablet app were used to report how many votes were there. This is important information since ballots are trying to make the move to online.

In an article from The Verge, author T.C. Sottek said, “In 2012, Mitt Romney was declared the preliminary winner of the Iowa caucus until people figured out two weeks later that Rick Santorum actually won by 34 votes. Errors like that are potentially damaging to a campaign.”

So with this Microsoft app being used, results may be more accurate than ever, and the public can feel more confident in what’s being reported by newspapers and other publications.

But, there is a question with security, as well as integrity. Bernie Sanders campaign members were worried because Microsoft employees have previously donated to Hillary Clinton’s campaign.

Whether security or partisan donations are the question, a more accurate system is what we may need for people to get out and vote.

Mobile apps are definitely becoming the next big thing for the election this year.